Empires are possibly one of the biggest of human constructs. They can last for hundreds of years, encompass a huge swath of territory, and more often than not, play a huge role in advancing human civilization, usually with a heavy human cost. Empires aren’t known for the delicate mannerisms after all. But what exactly is an empire?

Defining empires isn’t easy. Are empires defined by their dynasties? But Rome started out as a Republic, and the British Empire was actually a constitutional monarchy. Are empires defined by the size of their territory? Well Haiti was also once an empire so I don’t know how much territory counts. How about the people? Well it depends if you’re looking at the conquerors or the conquered. Biblical Israel was conquered by many empires, and somehow it still maintained a very independent character (but that’s because Israelis). Honestly? I don’t know, but stories are as good a place as any to look for answers.

Kalpa Imperial: The Greatest Empire That Never Was is a collection of eleven short stories about a fictional empire. Written by Argentinian Author Angélica Gorodischer, and translated by Ursula K. Le Guin, this book is a masterful piece of storytelling, and like an empire, something that should have lasted forever. Unfortunately, it did not, but it did give birth to a review, and also dreams of more stories.

The short stories in this book cover the length, breadth, and history of the empire from a wide variety of perspectives and perceptions. The windows these stories open can be as tiny as the mind of a seven-year old child, or as large as that of a forgotten city no one has ever heard of. Each story has something different to offer, and I wish I had the space to cover them all, instead, I’ll focus on the few that stood out.

“Portrait of the Emperor” and “Portrait of the Empress” are two very different stories. The former tells of the rise and fall and rise of the empire. While the latter tells of a woman who had some very sensible ideas on how the empire should be run. Both stories introduce the idea that it is the curious ruler, who makes the best ruler, and that it takes an inquisitive mind to make something that will last. The results? Surprising.

In “The End of a Dynasty: or a Natural History of Ferrets”, I got to meet a very unhappy prince going through the motions of being a prince, forced to adhere to a protocol that governed every aspect of his life, from meaningless words he had to recite upon awakening to the ritual of whipping a pedestal that represented the scum that was his dead father. Two strange men help him learn that there are other ways to live life.

“Concerning the Unchecked Growth of Cities” tells the story of a nameless city that started from the idea an emperor had for a port city, and was quickly forgotten, allowing a bandit to become mayor, and a sculptor to succeed him. As time passes, the city grows, evolves, and plays various roles in shaping the history of the empire, but we never learn its name.

“Well, well, my friends, I’m going to tell you why there are storytellers in the world: not for frivolities, though we may sometimes seem frivolous, but to answer those questions we all ask, and not as the teller, but as the hearer.”

There are no maps to this empire, no genealogies that the reader is supposed to follow, the language is English (translated from Spanish), and there are no recurring characters. There may be the occasional history mentioned of a ruling dynasty or location, but these are not necessary for the world building, but rather for the story building because Kalpa Imperial is just that, a book of stories.

These stories are almost always narrated by storytellers who are presented as a more authentic voice than the official historians. They know what “really” happened, having heard it from the actual human participants, witnesses, bystanders, rumormongers, gossips, and those who were actually there. It’s a good thing because the characters are very much human beings.

There are no truly good or bad characters in this book. Some are crazy, some are generous, some are wise, some are less wise, but actually most of them are a bit of everything. Emperors (and empresses) have a lot of power, and they are capable of ruling their empire well, while also declaring that only those who have been castrated can attend court, or doing something completely unexpected like learning history. But empires are more than just their rulers.

The book provides characters from all walks of life in the empire: doctors, prostitutes, generals, merchants, soldiers, gamblers, bureaucrats, noblemen, noblewomen, and professional storytellers in various phases of their careers. This wide panoply of characters allows us to view the empire through the perspectives of all its citizens, allowing us to glimpse how the most insignificant of individuals can trigger empire-shaking events, while those who are most powerful are also, just as often as not, as powerless.

Angelica Gorodischer is a storyteller in this book, and she chose to use Ursula K. Le Guin as her vessel to translate this book into English. It was a perfect choice. Storytellers have the power to enchant, captivate, horrify, engage, repel, charm, and whisk away their audiences to a magical world of their imagining using oral narrative techniques, of which Le Guin is also a master. I was so completely engaged I couldn’t stop reading. I really wanted to hear what was going to happen next!

At the same time, I would be remiss in my duty as a reviewer if I didn’t mention that these oral narrative techniques also included very long, run-on sentences, which could stretch out half a page or more. Both my wife and SIL pointed these out to me. Personally I enjoyed it as it gave the writing style a cadence, a pacing, as if the story were being recited to me. However, they were also extra long sentences. I felt it worked really well in this book. I can also see why others though would think differently.

The Omer today is grandness in eternity, and this is pretty much what empires are I think: glorious human constructs born in the real world with the potential to live forever in the minds of people. From their energetic founders to their crazed autocrats, from the palaces in their capitals, to the whorehouse in their slums, from the merchants who spread goods and services to all corners of the map, to the slaves they cart back. These are all very much part of the empire, and combined their voices create songs and stories that last long after the last physical statue of a forgotten ruler has crumbled into dust.

About The Author and Translator

Angélica Gorodischer, daughter of the writer Angélica de Arcal was born in 1929 in Buenos Aires and has lived most of her life in Rosario, Argentina. From her first book of stories, she has displayed a mastery of science-fiction themes, handled with her own personal slant, and exemplary of the South American fantasy tradition. Oral narrative techniques are a strong influence in her work, most notably in Kalpa Imperial, which since its publication has been considered a major work of modern fantasy narrative.

Ursula K. Le Guin wrote poetry and fiction throughout her entire life. Her first publications were poems, and in the 1960s she began to publish short stories and novels. She wrote both poetry and prose, and in various modes including realistic fiction, science fiction, fantasy, young children’s books, books for young adults, screenplays, essays, verbal texts for musicians, and voice texts for performance or recording. As of 2017, she had published over a hundred short stories (collected in twelve volumes), five collections of essays, thirteen books for children, nine volumes of poetry, four of translation, and twenty-three novels. Among the honors her writing has received are a National Book Award, PEN-Malamud, Hugo, Nebula, Library of Congress Living Legend, and National Book Foundation Medal. Recent publications before her death included Words Are My Matter: Writings About Life and Books,  2000-2016 with A Journal of a Writer’s Week, Steering the Craft, The Found and the Lost: The Collected Novellas, and Late in the day: Poems 2010-2014. Her website is ursulakleguin.com

Kalpa Imperial: The Greatest Empire That Never Was 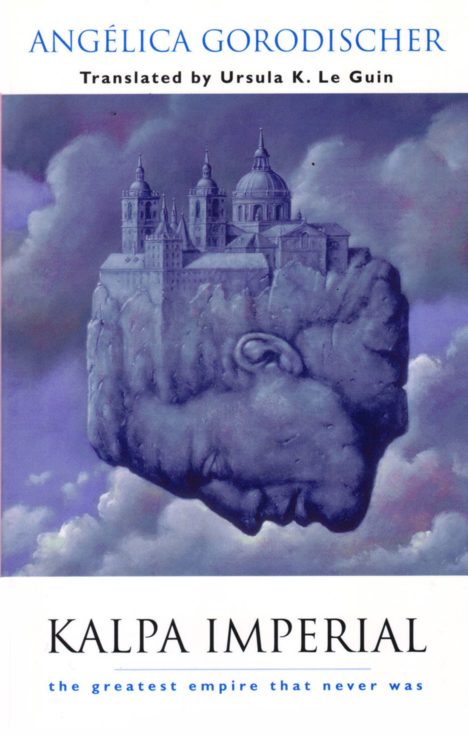